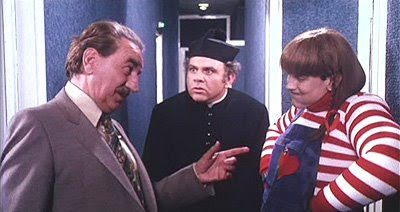 It takes a brave reviewer, even when supplied with a free review copy of the DVD, to watch a film with a title like FATTY GIRL GOES TO NEW YORK (1982). That title and a comedic DVD cover seem to be a warning to all that "only a limited Italian audience into wacky Italian comedies is going to enjoy this film." That's actually not far off from the truth, but FATTY GIRL does allow for some considerations otherwise, and in an odd, perhaps unnerving way, the film does stay in the mind a bit longer than most dispensable movie product.

FATTY GIRL (CICCIABOMBA in the original Italian) is really a showcase for the singer/actress Donatella Rettore, a complete unknown in the United States, but someone with a following in Italy--and perhaps in a few other European countries as well. She has a very lengthy Italian Wikipedia entry devoted to her, and there's an official site, too, as well as an extensive unofficial site. Rettore fans are sure to pounce on this DVD release.

In a fat suit and with her cheeks stuffed, Rettore plays Miris, a sassy, overweight girl who rebels at the establishment and the Church, and is the leader of an ugly girls club at her school. She is played a cruel pratical joke by the hunk of the school. (Well, she did get him expelled from school.) About to commit suicide, Miris spots a prize winning notice in a box of chocolates in front of her. The prize: a free trip to New York. There, she's noticed by the Baroness Judith von Kemp, (played by Anita Ekberg, a welcome familiar presence in this film), whose deceased rich husband had invented a weight-reduction formula which the Baroness wants to test out on a subject. The guinea pig will be Miris.

Rettore handles the dual parts of fatty and skinny very well, particularly when she has to speak pigeon Italian as an American, but I have to say both her fatty and skinny roles got on my nerves--the fatty because of her obnoxiousness and loudness, the skinny because of those awful dog hairstyles that were popularly outrageous in the disco era and which Rettore wears as the then-epitome of contemporary coolness and sexiness.

The surprise is that all this fluffy comedy stuff was directed by Umberto Lenzi. Yes, the Umberto Lenzi of EATEN ALIVE and MAKE THEM DIE SLOWLY, and he does a respectable job throughout.

Ultimately, FATTY GIRL GOES TO NEW YORK ends on a happy note for everyone. The fade out song, which is begun with a convertible car ride down Times Square's Broadway, is "This Time," composed by Richard Kerr and Gary Osborne. Kerr is best known as having co-written several of Barry Manilow's hits, including "Mandy," and one does get a hybrid Manilowish glow about this rather sweet and innocent film from Lenzi.

FATTY GIRL GOES TO NEW YORK is available from Amazon.com. The film is in 1.85:1 ratio, non-anamorphic, in Italian audio only, with optional English subtitles. Print quality is on the soft side, but certainly acceptable. 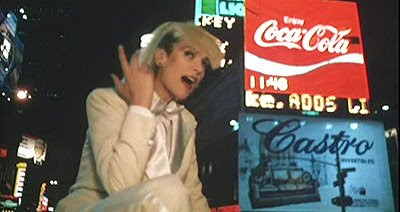