RETURN OF THE GLADIATOR review

Originally titled in English THREE GIANTS OF THE ROMAN EMPIRE, the Italian title--IL RITORNO DEL GLADIATORE PIU FORTE DEL MONDO (THE RETURN OF THE STRONGEST GLADIATOR IN THE WORLD)--has been simplified for the Mya DVD release as RETURN OF THE GLADIATOR. The film's theatrical Italian release occurred in the summer of 1971. By that time, the sword-and-sandal (or peplum) film had long disappeared as being a viable genre, though occasionally an attempt was made to pump some life back into it, particularly after the success of John Milius' CONAN THE BARBARIAN (1982).

Brad Harris (who, for you youngsters, looks a bit like Daniel Craig, but with genuine toughness) stars as Marcus, a former gladiator from the border of the Roman Empire, who now holds a high position in the Roman army. He is sent on a secret mission to a rebellious part of the Empire, which just happens to be that area he once called home. Joining him are two companions, one of whom, a habitual thief, The Fox (played by Raf Baldassarre), is the comedic presence in the film. There's a lot of potential in such a plot, but the problem is that the script doesn't take advantage of this intriguing idea at all, meandering instead into a series of ho-hum escapes and fights.

Brad Harris was born July 16, 1933, and was one of a group of American strong types who went to Italy to initiate careers in the Italian film industry after Steve Reeves made such an international impact with HERCULES (1958). Harris' first role in Italy was GOLIATH AGAINST THE GIANTS (GOLIATH CONTRO I GIGANTI, 1961), and he followed that with two more peplums, SAMSON (SANSONE) and THE FURY OF HERCULES (LA FURIA DI ERCOLE), both shot back to back by Gianfranco Parolini in 1961. These films, and similar ones like THE DESTRUCTION OF HERCULANEUM (ANNO 79: LA DISTRUZIONE DE EROLANO, 1962), made Harris a well-known peplum B-star, but he didn't limit himself to the genre when the signs started coming that the genre was passing its golden period. With the James Bond spy craze abooming, Harris found employment in copycat films, many produced by the West Germans, such as the Kommissar X series with Tony Kendell as his partner.

Harris was also a part of the adventure comedy THE THREE SUPERMEN IN TOKYO (TRE SUPERMEN A TOKIO, 1967), directed by RETURN OF THE GLADIATOR's Bitto Albertini. One gathers that the original English title of RETURN OF GLADIATOR--THREE GIANTS OF THE ROMAN EMPIRE (which is seen on the print Mya has used for the DVD)--is purposefully patterned after the titles of the Supermen film and its follow-up, also directed by Albertini and also starring Harris, THE THREE SUPERMEN IN THE JUNGLE (CHE FANNI I NOSTRI SUPERMEN TRA LE VERGINI DELLA GIUNGLA, 1968). Who knew that the Supermen films were so successful as to initiate imitations.

In his career Brad Harris was active behind the camera, too, executive producing KING OF KONG ISLAND, THE MUTATIONS, and other films. His long and varied filmography makes Harris leader of the peplum pack of actors, in terms of staying power in the film business. He's still active out there with AbOriginals (part of his Modern Body Design business), which, as the name suggests, deals with developing exceptional abs, a Harris physique trademark. Now in his mid-70s, Harris maintains a splendid physique, exercising daily, seven days a week, from 40 to 45 minutes and watching his diet. (Check out his routines and nutritional program in this IRON MAN MAGAZINE online article.) He appears to live very well by his motto: “Stay Fit, Have Fun, Harm No One, Inspire Everyone.”

Though he's around a lot in RETURN OF THE GLADIATOR, Harris seems underused, relying chiefly on acting skills that none of the strongmen peplum actors were particularly favored with. What they were favored with, and cultivated, were well-muscled bodies, and here the film just briefly shows off Harris' attributes in the film's best segment--the test of strength where two teams of horses, at opposite ends, attempt to pull apart the hero.

The legendary Massimo Serato (working under the name of "John Barracuda"!) is okay here as the villain of the piece, but obviously no match for Harris when the two have their final confrontation. Michel Lemoine (NECRONOMICON and CASTLE OF THE CREEPING FLESH) fares better in a slimy second-tier villain role, but like Harris, his talents are underused.

Considering the low-budget on pained display, the scenes of armies marching and the final battle show surprising merit, including the use of a cast of several hundreds. These scenes, however, seem to be borrowed from another film or outtakes from another film. I’d like to know which film, as they promise the potential of a decent historical movie.

I remember watching films like RETURN OF THE GLADIATOR when I was in the Army and stationed in Panama. There, I would adventurously go to Panama City's poorer neighborhoods to catch odd euro-films that were never exhibited in the United States. The print quality of these films was typically mediocre, diluted of freshness and vibrancy of color, and the projection was equally subpar, but one came away with an appreciation at experiencing the underbelly of Italian cinema in a non-deluxe environment found in a poor country. (In an online interview, Harris refers to himself as being a star in third-world countries.)

Mya's release is acceptable, though certainly not taken from vault elements. (I doubt anyone has really saved the negative of this film under exacting condition, but who knows?) The action behind the beginning credits suffers from some digital effects, but the rest of the film seems to play out fairly smoothly, with a possible exception or two. Though listed in some places online as having an aspect ratio of 1.66:1, the film is presented in scope (ca. 2.23:1), non-anamorphic, with an Italian audio option, but no English subtitles for that option, something that appears standard on all Mya releases in which an English audio track exists. A pity here, because the English dubbing is fairly drab while the Italian dubbing actors are much more lively and secure in their performances.

The Mya DVD is available at Amazon.com

Rare Italian poster for this film: 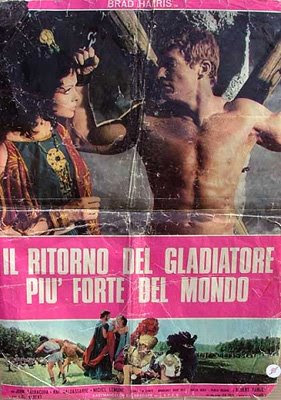