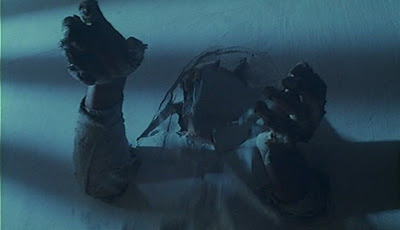 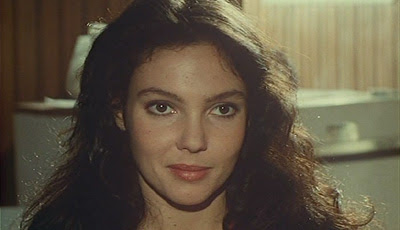 Lucio Fulci thought he was going to direct this film, but instead the helming chores eventually went to Lamberto Bava, son of Mario Bava and a fine filmmaker in his own right. PER SEMPRE (UNTIL DEATH) was a feature for Italian television, part of the 4-film series, Brivido Giallo (literally, Yellow Shiver). The other films in this series: UNA NOTTE AL CIMITERO (GRAVEYARD DISTURBANCE), LA CASA DELL'ORCO (THE OGRE) and A CENA COL VAMPIRO (DINNER WITH A VAMPIRE). The now-defunct Italian NoShame division released a box set in 2006 with all four films, subtitled "Gli Incubi di Lamerto Bava/The Nightmares of Lamberto Bava." Of these, only THE OGRE has yet to be released by Mya. 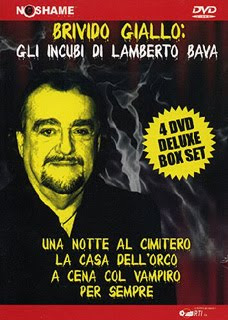 I've not seen a significant amount of Lamberto Bava's output, but UNTIL DEATH makes me take special notice as this film is a splendid chiller that starts slowly, builds up its mystery, then, in the last 15 minutes or so, unleashes some terrifying sequences and images--not gross-out horror, but horror of incident, with some subtle, but impacting special effects and makeup.

Italy's master of cult screenplays, Dardano Sacchetti, had a hand in the story and script of lovers, Linda (Gioia Scola) and Carlo (David Brandon), who do away with and bury Linda's husband. They proceed to lead quasi-normal lives thereafter as restaurateurs, until the appearance several years later of a mysterious, handsome and intense young man, Marco (Urbano Barberini), who begins a simmering seduction of Linda. But along with Marco arrive occurrences that Linda's husband may still be alive. Are these occurrences the work of a noisy cop who dines at their restaurant, a squeeze play upon the couple's guilt? Or is something else, something more frightening happening?

All three actors are spot-on in their performances, and Simon Boswell's electronic score is sure to provide a nostagic fix to euro-cult fans who remember the Italian age of horror of the 1980s when Dario Argento and Lucio Fulci were kings. Lamberto Bava handles everything with smooth discipline and focus, injecting eerie suspense and touches of fantasy when necessary, before letting nightmares attain full expression at the end.

As with other films from the Dania catalog, UNTIL DEATH is very good pictorially. The English audio suffers later in the film from some minor ticking; unfortunately the superior Italian audio, which contains more pronounced incidental sounds (like water lapping when the characters are by a lake) is not subtitled in English, as is the norm for Mya titles that have an English audio track.

The Mya DVD is available at Amazon.com.

The start of a splendidly chilling sequence from UNTIL DEATH: 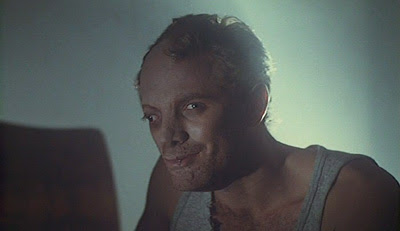