HUNCHBACK OF THE MORGUE - review 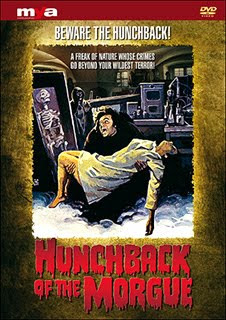 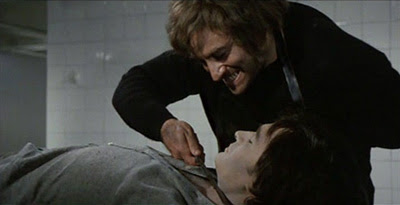 The early 1970s were banner years for Paul Naschy. In less than half a decade, ever since LA MARCA DEL HOMBRE LOBO (THE MARK OF THE WOLFMAN) introduced Paul Naschy as a horror film star in 1968, Naschy had made a name for himself as the premier exponent of Spanish fantastique. Impressively, not only was he an actor in these films, but their scriptwriter as well. His 1970 LA NOCHE DE WALPURGIS (English title: WEREWOLF SHADOW) became a surprise hit in Spain, inspiring Spanish producers to fund domestic horror films. The Spanish horror boom of the 1970s arose primarily because of one man: Paul Naschy.

Sharing a similar mood of decay and a baroque/grotesque sensibility, EL JOROBADO DE LA MORGUE could be considered a follow-up to the earlier EL GRAN AMOR DEL CONDE DRACULA. Both films were produced by writer/journalist Manuel Leguineche and directed by Javier Aguirre, two intellectuals who employed the horror genre for subterfuge against the decades-long fascistic government of Generalissimo Francisco Franco. Leguineche, a friend of Naschy’s father, had solicited the actor/scriptwriter for two horror films treatments, and within a month Naschy provided both the Dracula and hunchback stories. Leguineche also brought in experimental filmmaker Aguirre to direct, an inspired choice as these two Aguirre films would become landmarks in Spanish horror cinema. (Naschy would also appear in another Aguirre film a year later, EL ASESINO ESTA ENTRE LOS TRECE [THE KILLER IS ONE OF THE THIRTEEN], but his role was minor and the film not a success.) Joining in as producer on the hunchback film was Francisco Lara Polop, a scriptwriter who would direct his own horror film that year, the luxuriantly atmospheric LA MANSION DE LA NIEBLA (English title: MURDER MANSION).

Critical to the film would be its visual look. Cameraman Raul Perez Cubero, whose future would hold three nominations for Spain’s version of the Oscar, the Goya, and a win for his cinematography on YOU'RE THE ONE (2000), handled the photography, as he had done in EL GRAN AMORE DEL CONDE DRACULA. In both films he evoked a memorable texture of morbidity and the other-worldliness inhabited by the damned and the forgotten.

For Naschy his role would be one more addition to his ever-growing roster of portraying classic monster parts. He had already played a wolfman (numerous times), Mr. Hyde and Count Dracula, so it seemed natural for him to appear as a hunchback, this one named Wolfgang Gotho in tribute to Mozart and the wolf in Naschy.

Most of the cast assembled had been already initiated into fantastique. Maria Elena Arpon, who played Gotho’s primary love interest, is otherwise best remembered by euro-cult film fans as the first cinematic victim of the Blind Dead in Amando de Ossorio’s LA NOCHE DEL TERROR NOCHE (English title: TOMBS OF THE BLIND DEAD, 1971). The Austrian actress Maria Perschy had a substantial resume by 1972, with credits that included Jess Franco’s THE CASTLE OF FU MANCHU (1969) and Gordon Hessler’s MURDERS IN THE RUE MORGUE (1971).

The role of the scientist, Dr. Orla, was handled with flavorful efficiency by the sympathetic-looking Alberto Dalbes, who was on his way to becoming a frequently employed actor in Jess Franco movies. Born in Argentina in 1922, Dalbes studied Philosophy and Literature for a teaching profession, but dropped that ambition to embrace acting. Before moving to Spain in the 1960s, Dalbes had a successful theatrical and film career in his native Argentina during the 1940s and 50s.

Another Argentinean, Rosanna Yanni, essayed the curious role of Elke who, through either perverse inclination or romantic idealism, falls in love with the hunchbacked simpleton. Born Marta Susana Yanni Paxot in Buenos Aires, Argentina in 1938, Yanni began her entertainment career at twenty-two as a chorus girl at the Buenos Aires National Theater and later modeled in Italy, to finally settle in Spain in 1963, where she found regular work in comedies, adventure films and horror films. Her first horror film was, in fact, Naschy’s first--LA MARCA DEL HOMBRE LOBO. Her four films with Naschy, two with Jess Franco, and one with Blind Dead creator Amando de Ossorio have yearned her the affection and admiration of euro-cult film fans.

Vic Winner (Victor Alcazar) had already appeared with Naschy in EL GRAN AMOR DEL CONDE DRACULA and now took on his typical middling leading man role. Like Yanni, he would star in four Naschy films and is considered part of a beloved-by-fans Naschy troupe. Despite his calm, even lethargic looks, Winner energized himself in the future with scriptwriting and directing (non-horror) films under his real name and as Victor Barrera.

Antonio Pica’s solid and handsome presence typecast him as a police inspector in four Naschy films, while his crime-investigating partner in the hunchback film, Manuel de Blas, had played the Dracula role in Naschy’s, LOS MONSTRUOS DEL TERROR (English title: ASSIGNMENT TERROR, 1970). At the time Blas was married to Spanish cult-film icon Patty Shepard (another Naschy co-star!). He has remained a busy actor to this day.

Splendid locales were employed. The impressive Bavaria-like town of Viella in the Pyrenees Mountains substituted for Feldkirch, Austria, while the expansive cellars of Spain’s first king, Philip II, became the eerie subterranean hell in which Gotho hides and Dr. Orla sets up his laboratory. Madrid’s Hospital Provincial morgue provided a most suitable location for the shuffling midnight footsteps and barbarity of the hunchback.

The palpable gruesome atmosphere of the morgue scenes was easily inspired by the actual doings of the morgue staff. Naschy details one such moment in his autobiography, MEMOIRS OF A WOLFMAN (Midnight Marquee Press, 2000; translated by Mike Hodges): “On one occasion a dead man’s head was left poking out of the casket, and when one of the attendants pushed down on the rotten corpse, it sprang up and spewed a green vicious liquid over him.”

Permission was given to use a real corpse for a head-severing scene. Naschy took two swigs of whiskey but couldn’t get past the first cut into the throat. A dummy head was used thereafter.

In the film’s most talked about sequence, Naschy was set upon by real rats. Naschy had to be inoculated against possible rabies, and one would have expected Maria Elena Arpon to have been afforded the same precaution, as that was her, not a mannequin, lying on a slab with the rodents nestling and nibbling all over her.

“It was as terrifying as it was real,” Naschy commented about his rat scene in his autobiography. “The Ibys Institute caught a load of rats in the sewers and left them without food for some time. Once loosed on the set the filthy little beasts proved able to leap up to a meter high, sinking their needle sharp teeth into anything at hand. I felt their bites on several parts of my anatomy and wondered what would have happened to me if I hadn’t been wearing protection. It wasn’t a nice scene to shoot.”

As payment for their furious cameo roles, some of the rats were burned alive on camera. It was as terrifying as it was real.

On a deeper level of significance, Dr. Orla symbolized authority, while Gotho represented the subdued working class, striving for a ludicrous goal manufactured by leaders who know that the goal can never be attained but use it anyway to secure cheap labor and subservience. At one point, Dr, Orla makes it clear: “You see, Gotho, how the most insignificant person can be of use to science and to humanity. All you have to do is let yourself be led by a real leader.”

The film’s evolving outrageousness and grotesqueness, issuing from the pit of Spain’s monarchist and inquisitorial past, even from mankind’s primordial past, could not help but subliminally shake the principles of faith and tradition propping Spanish society. What better ruse than to use a horror film, which had been traditionally thought of as trash by many critics, as a release of political and social commentary (and sexual imagery) forbidden by the regime of Generalissimo Franco?

Unlike EL GRAN AMOR DEL CONDE DRACULA, Naschy’s hunchback film lacked the frequent nudity of the other film’s export version, however. A promotional still of a bare-chested Naschy with an equally bare-chested Rosanna Yanni exists, but such a scene never made it to the finished product, though Yanni’s breasts are very briefly on display in the uncensored international cut. Otherwise, in terms of nudity, the film is chaste at this point, probably having been pruned significantly when the script was sent to Spain’s censorship board and then when handed in for review.

And there are several moments that would have easily lent themselves to generous displays of female flesh: a whipping scene at a reformatory and Gotho’s kidnappings of women, one taking place while a woman is showering. There may have been good reason not to shoot, or promote, a “double version” for these scenes. With the censorship that EL GRAN AMOR DEL CONDE DRACULA suffered (in one interview Naschy mentioned 36 cuts!), the producers would have been justified in not having this new film go through excisions that could have hollowed out portions of their film around the world.

For his performance as Wolfgang Gotho, Naschy won the Georges Melies Award for best actor at the Second International Festival of Fantastic Cinema in Paris in 1973, beating out such established figures as Christopher Lee, Jason Robards and Herbert Lom. At the festival where he received his award, he met director Terence Fisher, who complimented him on his role and showed enthusiasm in making a Jekyll and Hyde picture with the Spanish actor/scriptwriter. (Dare we note some similarity between EL JOROBADO DE LA MORGUE and Fisher’s 1974 FRANKENSTEIN AND THE MONSTER FROM HELL?)

Now, weeks after the death of Paul Naschy on November 30, 2009, the first appearance on NTSC DVD of this Naschy classic comes from Mya to street in January. From what I can tell the source is the Spanish version (released by Spain's TriPictures several years ago) with the brief nude scene involving Rossana Yanni replacing the Spanish clothed edit. Pluses include English subtitles for all three audio track--Spanish, Italian and English. It has been Mya's policy not to have English subtitles when English audio is present, but thankfully here the company has gone the extra mile to supply English subs. There's also a photo/pressbook gallery (borrowing from Anolis' German DVD release of this title), a comparison between the nude scene and the non-nude one, the American trailer, and the Italian credits sequences (the beginning credits have different music replacing the familiar accordion um-pa-pa, and are white lettering over a black background). Colors are quite good, with blacks being very solid. Picture quality is a bit on the soft side. There's some slight aliasing and shifting to the picture at times, which will probably be more apparent on better systems will larger monitors. I also noticed two quick, minor horizontal breakups during a fight scene between Gotho and the Vic Winner character. The DVD can be ordered from Amazon.com. 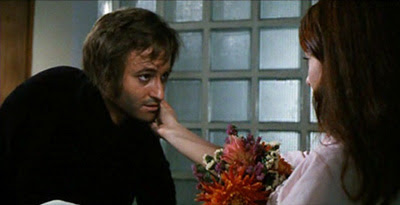 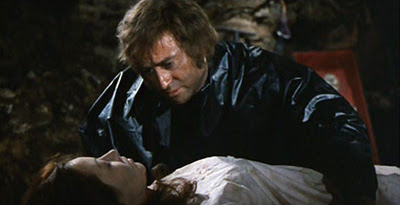 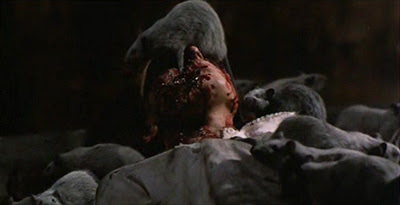 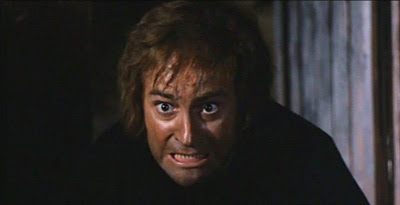