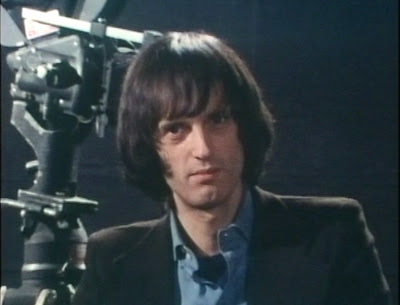 DOOR INTO DARKNESS (LA PORTA SUL BUIO) presents the four episodes of a Dario Argento produced short giallo series that first appeared on Italy's RAI television in 1973. Previously available in a PAL edition (which quickly sold out), Mya's DOOR INTO DARKNESS marks the first official appearance of this series in the United States. The original film elements have been either lost or destroyed, so any presentation must be sourced from video elements, something that is visually obvious when one views the two-disc set from Mya. Despite this, DOOR INTO DARKNESS is sure to be of value to Argento-philes, though its importance to the casual horror fan will be minimal. The episodes themselves spark and maintain a viewer's interest, but for this reviewer fail to ultimately deliver the thrilling surprises found in Argento's best theatrical feature films. All of the episodes are introduced by a then very young-looking, and, at times, surprisingly good-looking, Argento.

The first episode, "The Neighbour," establishes an efficient fission scenario of a young couple, with baby, who stay overnight in their new groundfloor apartment, over which, in the upper apartment, an older man has just murdered his wife. Naturally, this murderer will soon be threatening the young couple. The couple behavior regarding their baby, however, is unrealistically portrayed, though necessarily so, given how the couple's dilemma resolves itself. A solid effort, directed by Luigi Cozzi, but, because of the couple's odd unthinking lack of care for their child, somewhat wobbly in realism.

The second episode, "The Tram," was helmed by Dario Argento under the alias of Sirio Bernadotte. This is one of those mysteries that challenges the viewer to figure out a classic crime puzzle: How a person can murder someone in full view of witnesses and not be found out. The murder happens aboard a tram, and there are at least half a dozen passengers who should have seen the murder happen but didn't. Unfortunately, a vital clue to the solution of the puzzle is kept from the viewer until nearly the end, and when that clue arrives the identity of the murderer becomes anti-climatic. Still, the episode has it delightful moments, particularly when the detective's wife is chased in the night through the tram yard by the culprit.

The third episode, "Eyewitness," is described in Argento's introduction as the last, so there must have been some switch in order in this, and the previous PAL release's, presentation. A woman, driving home late from the city, almost hits a blonde female who shoots out in front of her car. When she gets out of the car to examine the fallen blonde, she discovers blood streaming out of the blonde's back and a lifeless glaze in her eyes. She notices someone in the woods, who approaches, gun in hand.... Escaping, the woman tells her story to the police, who investigate the supposed scene of the crime--and find neither body, nor any trace of blood. Apparently reshot by Argento when he became dissatisfied with the original director's efforts (Roberto Pariante), this episode will have you on the edge of your seat at times, though if you've seen enough murder mysteries you will be able to figure out what's happening fairly easily. In other words, it's not the mystery that works so much, as it is the way the scenes of suspense are handled.

The fourth episode, "The Doll," is another effort by Cozzi. In this one, a violent mental patient escapes from an asylum and the search is on to find this person's whereabouts before murder occurs. As with "Eyewitness," the viewer who has seen similar mysteries will be able to figure most of what's happening, making Argento's challenge to do so in his introduction empty bravado. Erika Blanc fans should note that she appears briefly in this episode.

Mya's two-disc set also contains Cozzi's 83 minute documentary on Argento, "Dario Argento: Master of Horror," which shows the Italian director in action (on TWO EVIL EYES) and being interviewed, and presents various clips from his films. Unfortunately, Cozzi's lengthy introductions to the television episodes, made for the PAL DVD release, are not to be found in the Mya presentation, so we are denied learning the backstory to this series produced, and partially writen and directed, by Argento.

Because of mundane film elements on display, and the general low-budget nature of the series, DOOR INTO DARKNESS comes across as somewhat depressing and certainly lacking the stylish sleekness of Argento's movies. If you are not an Argento maniac, DOOR INTO DARKNESS should at least satisfy your curiosity, give you an idea of what an Italian TV series from the 1970s is like, and provide you with a few chills and thrills. If you are an Argento maniac, and don't yet have this series in another edition, then this DVD set is clearly for you.

Click here to order the DVD.
Posted by Mirek at 4:17 PM