Ryko Distribution has announced more Mya DVD releases, this time for May 19: THE LEGEND OF BLOOD CASTLE, THE RETURN OF THE GLADIATOR and THE SWEET PUSSYCATS. List price for each DVD is $24.95. Below are the covers and sell sheet descriptions (with minor corrections). Beware: Some spoilers are presented in the plot synopses. 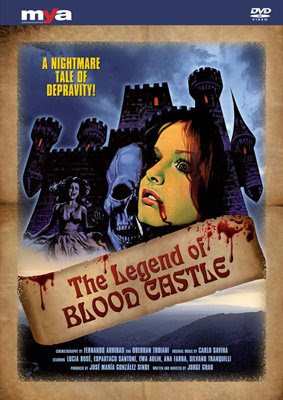 THE LEGEND OF BLOOD CASTLE. When Countess Erzsebet Bathory (Lucia Bosé) is accidentally splattered with some blood drops from one of her nubile maidservants, the Countess finds out that the blood can preserve her skin young and beautiful. Compelled to kill innocent young girls to use their blood, the Countess is helped by her husband Karl (Espartaco Santoni), who fakes his own death and pretends to be a vampire to fool the superstitious villagers about the source of the exsanguinations. In the meantime Karl finds himself attracted to Marina (Ewa Aulin), the young daughter of a local innkeeper, perhaps another victim for the Countess. Sell Points/Extras Features: Believed one of the best adaptation of Elizabeth Báthory’s legend, this is one of the most disturbing and chilling movies from Spanish horror cult director Jorge Grau (Let Sleeping Corpses Lie). The Legend of Blood Castle is presented in its original full Spanish edit. Deleted and alternate (more explicit) scenes are included as extra contents. Extra: Deleted scenes, Alternate scenes, Italian opening credits, Poster gallery 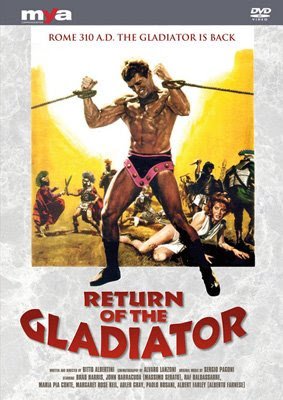 RETURN OF THE GLADIATOR. Rome, 310 A.D. The Roman Empire is beginning to collapse, and Proconsul Tullius Valerius (Albert Farley) fears that provincial governor Gaius (John Barracuda) has been secretly working with those Germanic barbarians seeking to end Roman rule. Valerius then orders to former gladiator Marcus (Brad Harris) to go undercover and investigate this situation. In Gaius’ territory also lives Lycia (Maria Pia Conte), the beloved of Marcus. Gaius soon learns of Marcus’ plans, and has him captured and unfairly accused of murder. Led to believe that Marcus is guilty, Lycia turns against him, and Gaius condemns the gladiator to be pulled apart by teams of horses. Sell Points/Extras Features: International star Brad Harris leads this classic sword and sandal movie, set in ancient Roman times. Directed under the moniker of Al Albert by genre specialist Bitto Albertini. 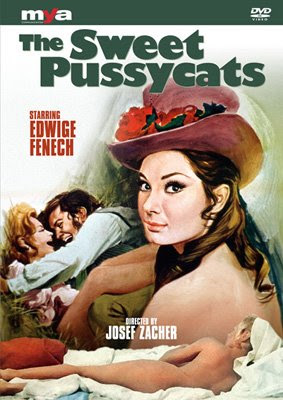 THE SWEET PUSSYCATS. Count d’Alsay (Ernst Stankovski) and Colonel Delaroche (Sieghardt Rupp) live in opposite sides of the same castle, of which they contend the ownership. The two gentlemen bet each other who will be the first to bed their respective new virgin maid, and the winner will have the castle. In order to win his bet, Delaroche is forced to ignore his lusty fiancee (Edwige Fenech), who quickly turns her attention to another officer. In the mean time a whole stable of local prostitutes gets involved in the act. Sell Points/Extras Features: This erotic comedy is one of the first efforts by gorgeous Edwige Fenech, who would later become the queen of Italian sexy movies. A rare title, presented fully uncut, in which the young Fenech generously shows herself more than usual. Extra: Photo and poster gallery.
Posted by Mirek at 9:45 PM