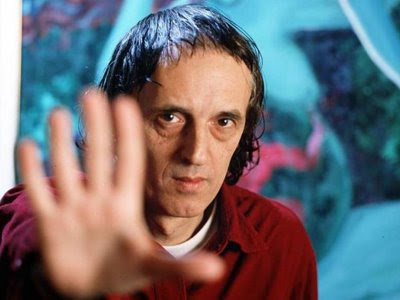 It appears the LoveLockAndLoad message board came out with the news first for Anglo-speaking folks--a translation of a posting on the Profondo Rosso website owned by Dario Argento and Luigi Cozzi. Here's the translation:

>>Good news and bad news. The good news is that the much sought after film by Dario Argento, Four Flies on Grey Velvet, has finally been released on dvd in the United States and an Italian release was announced for May by the distribution company 01, (Who are none other than RAI Cinema)

The bad news is that lawyers working for the Argento family have begun proceedings to stop both releases. Why? Because Dario and Claudio Argento, who own all territory rights except for America (where it's owned by Paramount) were only informed of this release by chance. An unknown foreign company sold the rights to Four Flies on Grey Velvet to RAI, but Dario and Claudio claim they never sold the rights to this unknown foreign company, so, according to them, they regard it is a gross act of audio/visual piracy.

I've queried Mya about this troubling information and was told that they are confident that this will not affect the U.S. release, as the Argentos do not own the U.S. release rights.

There are numerous suppositions one can generate over this rights thing. Through the years, fans have heard varying stories about the rights to FOUR FLIES, the one particularly prevalent was that the rights were complex and that ownership was spread about several entities. (Which is why, the explanation goes, the film has been out of official circulation for decades.) Now, according to the Argentos, they own all rights except those in the United States. Certainly the identity of the "unknown foreign company," and the story behind its supposed acquisition of the FOUR FLIES film, would probably direct us to some truth.

These issues will not be resolved at this point, and it may take legal action to settle who owns what, if any legal action will be forthcoming. Stay tuned.
Posted by Mirek at 7:24 PM