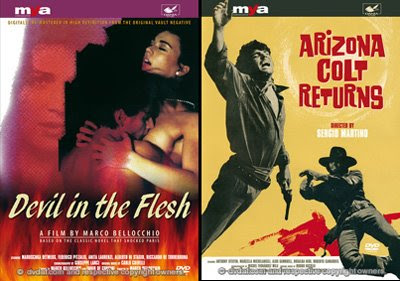 As noted by the DVD Aficionado website, Mya's July releases will be DEVIL IN THE FLESH and ARIZONA COLT RETURNS. Both films will street July 28th. DEVIL IN THE FLESH already had an NTSC release from NoShame a few years ago, while ARIZONA COLT RETURNS, which stars Anthony Steffen, Aldo Sambrell and Rosalba Neri, saw a German DVD release on the Koch Media label. The Mya DVD will be the film's first U.S. DVD release.

NoShame's description for DEVIL IN THE FLESH can very well be utilized for the Mya DVD:

One of the most controversial Italians films of the 80s, DEVIL IN THE FLESH takes Raymond Radiguet’s classic novel and updates it to modern times. Dealing with the legacy of Italy’s "leaden years" and the aftermath of the social struggles headed by the extreme left wing revolutionary groups, DEVIL IN THE FLESH caused a critical uproar upon it’s release due to its highly-charged political and sexually frank subject matter. Marushka Detmers (THE MAMBO KINGS) stars as Giulia, a young woman engaged to marry Giacomo, her fiancée who’s sitting behind bars because of his political activity. Restless in her appetites and inner turmoil, she meets a young student named Andrea and a passionate affair quickly ensues. But when the day arrives in which she has to face whether she wants to share her life with Giacomo or not, Giulia takes a surprising decision…

As with the NoShame release, the Mya DVD will present the film in its original widescreen aspect ratio, digitally re-mastered from the original negative, and uncut and uncensored.

Update 3/29: As I was working on filling up info on "The List" today, I noticed that both DEVIL IN THE FLESH and ARIZONA COLT RETURNS are on it, but way down on the list, numbers 109 and 118 respectively. This means that Mya's more immediate titles, to be released this year, could come from anywhere on the list and not just from the top batch.
Posted by Mirek at 6:28 PM