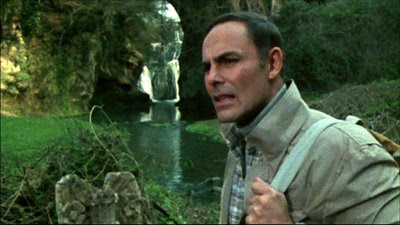 While most eyes in Mya's release schedule have thus far been on FOUR FLIES ON GREY VELVET, another film, a better one I think, has been unfairly overlooked. SCORPION WITH TWO TAILS (1982) has an interesting transformational history. The project started out as a two-parter for Italian TV (100 minutes for each part) and then morphed into a theatrical feature. I'm not clear on whether the two parter ever got actualized (it appears not), but scenes exist from it that were not in the subsequent main feature and which are now included in the supplemental section of the Mya DVD.

SCORPION WITH TWO TAILS concerns the connection a young woman in New York has with "the Immortals," who are represented by the Etruscans who once resided in a part of Italy and held mystical rites in sulfur-steaming caverns. This young woman, Joan Barnard, is naturally a reincarnation of one of the Immortals, and she travels to Italy to uncover the meaning of her dreams and the reason for the murder of her husband, the archeologist Arthur Barnard (played by John Saxon) who was found with this head brutally twisted around, apparently an old Etruscan method of sacrifice or extermination.

SCORPION WITH TWO TAILS brought me wonderfully back to the days when Italian horror cinema ruled the exploitation venues of the world. This is not only due to the subject matter, partially incoherent and partially psychotronic in that unique Italian way, but to the periodic clunky dubbing, the vapidness of the lead actress, the presence of an over-the-hill elder American actor (Van Johnson), the fluid direction from such a genre master as Sergio Martino and an intriguing script by the now legendary Ernesto Gastaldi, the world view that human life is cheap, and the score by Fabio Frizzi, which may be the most important element in giving SCORPION a Fulci feel without this being a Fulci film. There is even the obligatory weekend shoot in New York (with the Twin Towers of the World Trade Center in view) to evoke the memories of similar films that left the Italian production line in the 1970s and early 1980s.

Because the initial purpose for this film was for a television presentation, there is little gore and zero nudity, but instead SCORPION relies on the bizarre method of murder--the twisting of a head till the front is at the back--and sinister atmosphere to intrigue one and keep one captivated. And there's plenty of atmosphere, with much spooky adventuresome entries into and explorations of corridors and caverns below the earth, all scored melancholically yet tensely by Frizzi. (The television only scenes in the supplemental section are also damn chilling, too.)

As Joan Barnard, actress Elvire Audray is simply terrible--a doe-eyed pretty presence with little substance and acting skills on display. True, much of the fault can be placed in the fact that she seems to have been mouthing her lines in phonetic English for later dubbing, exaggerating the words in the process, so that she appears to be speaking more slowly--and therefore dumbly--than she should. To make matters worse, the actress dubbing her is also woefully uninspired. Somehow, however, Elvire Audray and her faults fit in with the foreign exploitation feel of this film. An exceptional actress would undoubtedly have spoiled the mood.

Many of the other players are euro-acting professionals, however, interesting faces with a viable presence--and it's always nice to see John Saxon turn up in something like this. There are a number of points still unresolved or not further brought up by the time the film ends, this due no doubt to the pruning of what must have been a much longer script. Why, for instance, is Joan continually sweating? (One can surmise because she's connected spiritually to the ancient Etruscan steaming sulfur pits.) What is the final significance of the "two tails" of the Etruscan scorpion design? Is the supernatural presence in the Etruscan cavern the lover/husband of the woman who would be reincarnated as Joan Barnard in the modern world?

Had SCORPION WITH TWO TAILS ever appeared in its full two-part form, it may have proved to be a notable and fascinating television program, one mentioned frequently in books on Italian horror and a holy grail for many. As it is, despite its faults, it can be easily considered a minor gem.

The Mya DVD is on sale at Amazon.com. 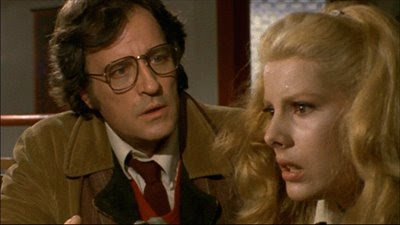 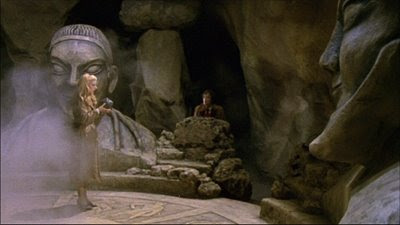