THE REVENGE OF THE CRUSADER review 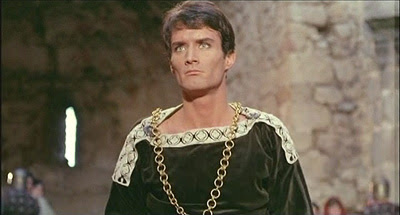 A co-production between Italy (Imprecine) and Spain (Hispamer Film), THE REVENGE OF THE CRUSADER (1964) is a rarely seen movie, scripted by Riccardo Freda, that adds one more small piece to the bigger picture of the European adventure-romance film. Imprecine also co-produced with Hispamer Riccardo Freda's GIULIETTA E ROMEO (JULIET AND ROMEO), for which Freda wrote the screenplay and directed. Jose Luis Monter is credited as director of REVENGE, but the possibility exists that some, if not all, of the work is Freda's, as credit forgeries for quota purposes in foreign co-productions were not uncommon during this time. And, as sometimes happened in his career, Freda would walk off the set before finishing a film, handing completion off to someone else. The Italian credits make particular note of Freda by announcing before the title credit that the film is "realizzata" by him. If THE REVENGE OF THE CRUSADER is Freda's work, it will not advance his reputation much, however.

The original title, GENOVEFFA DI BRABANTE, clues us in that this was a star vehicle for Spain's Maria Jose Alfonso, a historical drama/romance set during the times of the Crusades, but not an epic filled with battles or any cast of thousands dazzle. What most will not know here in the States is that the film is actually based on a popular European legend. A Wikipedia entry informs us about Genovefa of Brabant:

"Her story is a typical example of the widespread tale of the chaste wife falsely accused and repudiated, generally on the word of a rejected suitor. Genovefa of Brabant was said to be the wife of the palatine Siegfried of Treves, and was falsely accused by the majordomo Golo. Sentenced to death she was spared by the executioner, and lived for six years with her son in a cave in the Ardennes nourished by a roe. Siegfried, who had meanwhile found out Golo's treachery, was chasing the roe when he discovered her hiding-place, and reinstated her in her former honour.... The Genevieve tale first obtained wide popularity in L'Innocence reconnue, ou vie de Sainte Genevieve de Brabant (pr. 1638) by the Jesuit Rene de Cerisiers (1603-1662), and was a frequent subject for dramatic representation in Germany." Italy already visited the subject in a Primo Zeglio directed film made in 1947.

The film does have laughable replacement of actors with obvious stunt doubles with little attempt to hide that the doubles are not the original actors. (This must have been especially noticeable on the big screen.) In fact, in the beginning of the film, it's almost impossible to connect the characters to the actors, as doubles hold much of the screen time. A later sequence, involving Genoveffa and a deer (that's noticeably stuffed) and then a wolf attack (with an obvious male double substituting for Maria Jose Alfonso) raise the laugh meter where laughter shouldn't even be present.

While it's nice seeing Alperto Lupo of ATOMIC AGE VAMPIRE on the screen in a heroic role, the captivating presence here is Stephen Forsyth, known to euro-cultists for his role as John Harrington in Mario Bava's HATCHET FOR A HONEYMOON. Forsyth plays up his villainous role with gusto, continually exhibiting the brewing insanity in his piercing eyes and tweaking what may have been a homosexual veneer to his character. His performance is not as wild and over-the-top as what John Drew Barrymore would do in similar historical tales, but it is authentic and mesmerizing in its own dimensions, and sure to delight those who may have little interest in seeing this film. And his character has use for the axe here, just as his Harrington character would in the Bava film.

Despite the faults of this admittedly minor film, I have to admit to being moved by a couple of scenes near the end. Stephen Forsyth's performance is a vital element in keeping the film percolating, as leads Lupo and Maria Jose Alfonso merely perform their expectant duties. Carlo Rustichelli's score is appreciated for its workman-like job, and the talented composer shines with a melody employing a beautiful female vocal that is, unfortunately, little played in the film. The directing is fairly standard, but there is one murder sequence, coming late in the film, that is brilliantly realized, with its silent corridor and sinister steps perspective, and which reminded me of some of Freda's best work. Was he responsible?

The Mya presentation is in Italian audio only, with removable English subtitles that are occasionally too literal and oddly phrased. Picture quality is good. The framing at 1.85:1 is slightly tight at times for what probably was a 1.66:1 European exhibition, but generally this framing issue is not a problem and unnoticeable. My copy had some instances of brief motion jerks, indicating some PAL to NTSC conversion issue, but another reviewer of this DVD didn't mention this, so perhaps the problem is just my disc.

It's always good to have such a film, based on a European legend unfamiliar to Americans, available for the curious, the connoisseur and the collector.

The Mya DVD is available from Amazon.com. 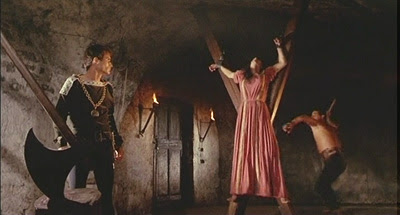 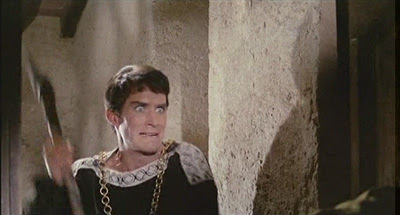 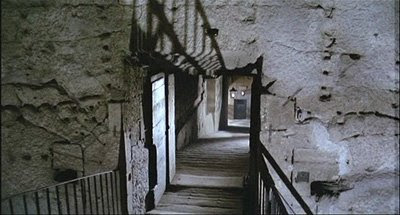