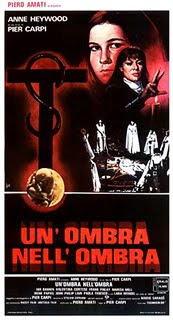 I've been intrigued by this film ever since I acquired several relatively hot stills from it about a dozen years or so ago. Never had an opportunity to view the film until now, with the release by Mya of SATAN'S WIFE, a re-title of the English version, RING OF DARKNESS. The Italian title is UN OMBRA NELL'OMBRA, which, according to my limited Italian assistance from a translation program, can be translated as A SHADOW WITHIN A SHADOW.

Any Italian film from the 1970s that contains satanism and nude female practitioners is deserving of innate curiosity and potential appreciation. UN OMBRA NELL'OMBRA (1977) has its faults, but is intriguing enough, and has moments of pure devilish exploitation going for it, to make the film notable and worthy of some background research. 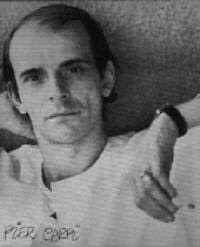 Pier Carpi (1940-2000) only directed two films (UN OMBRA and POVERO CRISTO), but had a substantial resume in the arts, with work in fumetti (comics), including the Italian versions of Mickey Mouse, Batman, and Superman. He created and wrote for the fumetti HORROR, and had a hand in the renowned DIABOLIK publication. His creative wings also embraced authorship, and he won various literary and journalism awards in his career. Carpi had an interest in esoteric, satanic and religious subjects, as exemplified by such works as LE SOCIETA SEGRETE (THE SECRET SOCIETIES), I MERCANTI DELL'OCCULTO (MERCHANTS OF THE OCCULT), RASPUTIN ULTIMO PROFETA (RASPUTIN THE LAST PROPHET) CAGLIOSTRO (which was made into a film in 1974 by Daniele Pettinari). UN OMBRA NELL'OMBRA is, in fact, based on a book of his that appeared a couple of years before the book's filming began, although the script may have been developed first, as the IMDB mentions, accurately or not, that Carpi had tried to get the story filmed in the 1960s, without generating interest from financial backers until William Friedkin's THE EXORCIST became a mega world-wide hit. (No doubt the popularity of THE OMEN also had a hand in the making of the Carpi film.) 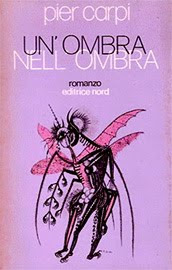 One judges that Carpi had some difficulty in putting into his film all the important ingredients of the book, as the film traverses a choppy narrative, with seemingly important characters turning up to then, inexplicably, never be seen or referenced to again. One is led to believe that "The Professor," played with sleazy charm by Ian Bannen, will be a pivotal presence in the film, as we see him philosophize about good and evil while teaching chess and underlining the symbolic nuances of the white and black pieces. He then makes a couple of relatively important appearances soon thereafter, but after the Devil chases him away, he is never seen again. Frank Finlay's appearance as "Frank" is curiously brief and inexplicable. John Philip Law turns up as a priest who is about to renounce the priesthood, but he, too, is around for a limited time and then gone.

If one can gather something about the novel without having read it, one senses a treatise/meditation on good and evil, Catholicism and Satanism, and, in particular, the lonely angst of women inhabiting a shadowy world within the shadows. The film touches on these points, but doesn't underline them in the whole, an intellectual deficit that leaves the viewer somewhat unfulfilled. If Carpi's book were available in an English translation (it isn't), one could read the source and fill in the substantive gaps. This is denied us and will probably always be, unless Carpi becomes a cult figure whose works will necessitate translation.

Because of holes in the plot, the back copy of the Mya, written by someone with panache, presents a welcome, informative synopsis:

"Four beautiful young women surrender to the fiendishly charm of Lucifer himself. But their nights of unholy pleasure have a price: they can't have sex with other men, for the Lord of Darkness is a very jealous lover indeed. The otherworldly fruits of these bestial couplings go by the names of Almarisa and Daria. While the former starts to loathe herself as soon as she realizes who her father really is, the latter perversely learns how to enjoy her devilish skills to wreak havoc in the human world. To put an end to her hellish endeavours, a very unlikely exorcist is enlisted."

(By the way, I love the end ballyhoo of the back copy text: "Long sought after lost classic of Italian psychotronic horror genre, SATAN'S WIFE features some of the weirdest scenes ever committed in films. Ripe with fleshy sex babes, blood, gore, bizarre visuals and otherworldly rituals, this lost nugget of exploitation was unearthed from the deepest vaults of forbidden cinematic pleasures.") 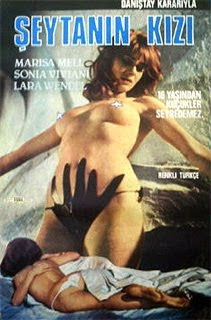 The film has an impressive international cast--Anne Heywood, Lara Wendel, Valentina Cortese, Irene Papas, Ian Bannen, Frank Finlay, John Philip Law, Marisa Mell.... One wonders if some in this cast were not only seduced by the money offered to them, but by the possibility of making a supernatural film with deeper intellectual elements than what would have been the norm in those days.

The exploitative nudity in the film didn't touch all the female stars, with a body double being used for Irene Papas. I don't know if this legendary Greek actress, with her fantastic tragic face, ever had a nude scene, but if ever the opportunity presented itself, it was here, in her role as a wealthy woman who, seeking the love of a man, debases herself at night by becoming a common prostitute.

Neither Anne Heywood nor Lara Wendel were strangers to nude scenes, however. What make Wendel's nude scenes noteworthy is that she was around 13 years old when she made them for this film.

I should mention my one casting disappointment--Ezio Miani. Miani, who made only three films in his career, turns up as Lucifer here, but he's not a figure who inspires fright nor remarkableness. (The Lucifer role would have been excellent for someone with such distinct saturnine looks as Ivan Rassimov.)

Despite his limited directing credentials, Pier Carpi handles his assignment very well, helming everything with a sure and smooth hand. Set design is appropriately satanic, with the presence of Luciferian-themed paintings and sculpture that may reflect Capri's own collection or of compatriots that he knew. The music by Stelvio Cipriani has a Dario Argento-ish aura and portions of it were later reused by Cipriani for other scores, including SOLAMENTE NERO (THE BLOODSTAINED SHADOW).

Though filmed in 1977, UN OMBRA NELL'OMBRA had to wait two years to see release in Italy. I don't know if the film ever had a release in the United States, but if so, it probably happened in limited play in grindhouse theaters. The film was certainly missing from the catalogs of U.S. video companies during the heyday of video and because of that it became a lukewarm holy grail among American euro-cult aficionados.

Mya's presentation is sourced from a video element. Though overall the element seems to be in fine shape (I noticed only one video-sourced flicker), pixelation will be noticeable from time to time in black areas. The biggest problem in not having access to an original print element is that scenes in the dark or in shadows are difficult to fully make out, which in the case of UN OMBRA NELL'OMBRA is unfortunate. As a plus, the Mya DVD is in anamorphic widescreen.

The DVD is on sale at Amazon.com.

UPDATE: John Bernhard aletred me over at the Latarnia forums that the Mya release is missing a scene: "It's a coven scene where the devil is about to make a new convert, but before he mounts her, the other women converge on Satan and prevent him from taking another initiate." He directed me to a November 2007 post by Johan Melle at the LoveLockAndLoad message board, where we learn exactly what's missing, with screen captures. Good work, Johan!

Incidentally the run-time of the Mya presentation is about 1:27:25. The more complete version, seen on an old Belgian video, runs 87 minutes, PAL time, which when transferred to NTSC speed would be about 90-91 minutes. I agree with the commentary on the LoveLockAndLoad board that there's a good possibility more scenes were shot for the film, but left out at the editing stage. 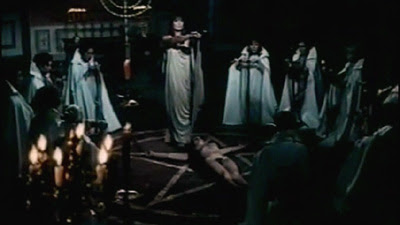 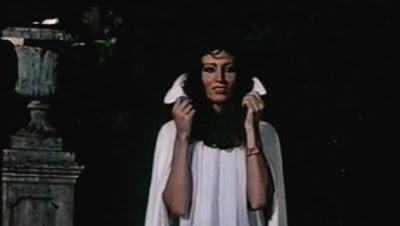 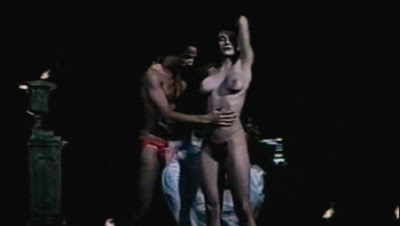 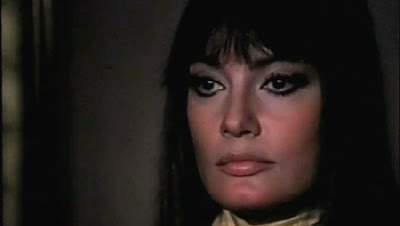 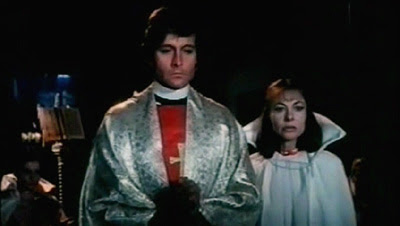 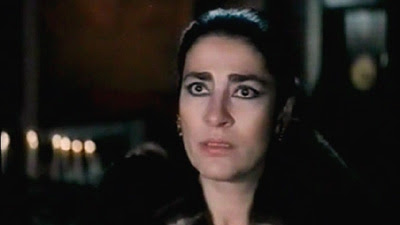 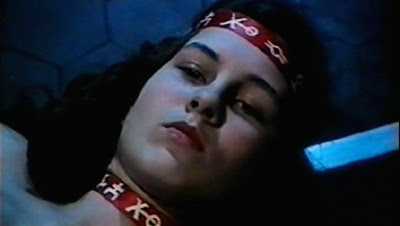 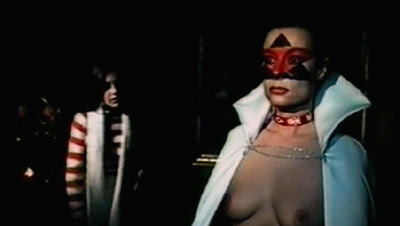