Before he became a master of the giallo form, director Sergio Martino was responsible for a few "mondo" movies. One of these, NAKED AND VIOLENT (AMERICA COSI NUDA, COSI VIOLENTA, 1970) is forthcoming from Mya in September and not on the Mya master list I provided a couple of months ago. So, another surprise.

This is a very rare film, with almost nothing written about it that I could find. According to a listing for the film in a couple of Italian websites, NAKED AND VIOLENT is a look behind the facade of then contemporary America, showing the moral and spiritual poverty of the country, and underlying this by exploring such mondo subjects as bourgeoisie orgies, crime, racial persecution, etc. Edmund Purdom does the narration, and Bruno Nicolai handles the music. Purdom also narrated Martino's first mondo (which was Martino's first film), MONDO SEX (MILLE PECCATI... NESSUNA VIRTU, 1969), of which author Mark Goodall wrote in SWEET & SAVAGE (Headpress, 2006): "... well-executed, colourful, crisply edited and entertaining.... One can see from this film why Purdom was favoured so much as the voice of English mondo. His narration is hugely varied, expressive and like Ustinov, Purdom delights in 'admiring' pretty young girls and aping the accents of foreigners...." One expects something similar with NAKED AND VIOLENT, though taking place in the United States, obviously. Should prove interesting. 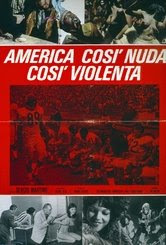