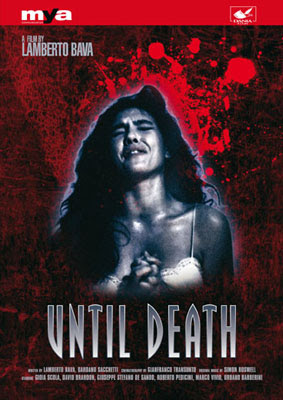 The third release coming from Mya in September is Lamberto Bava's UNTIL DEATH (FINO ALLA MORTE, 1987). Shot for Italian DVD, this film has a good reputation, with a reviewer on the IMDB remarking: "The film that this one takes most of its influence from is undoubtedly the 1946 masterpiece The Postman Always Rings Twice (which coincidently (or not) was remade six years before this film), and this is shown by the central plot and characters; all of which are clearly reminiscent of the earlier film. However, this is an Italian movie - so you can count on a few over the top surprises!" And: "...the film features some brilliantly atmospheric music along with a quality cast of actors, most of which have worked with big names such as Lucio Fulci and Dario Argento."

Another reviewer: "When it comes to atmosphere and horrific mood-setting, this definitely is one of Lamberto Bava's best accomplishments. The music is also good and the acting is far above Italian standards, with Gioia Scola (Lucio Fulci's 'Conquest'), Urbano Barberini (Dario Argento's 'Opera') and especially David Brandon, the mean-looking actor from 'Delirium' and 'Caligola – the Untold Story'. Recommended!"